About new billions of dollars, Gazprom and the report for 2019

I mentioned in my previous post (https://bit.ly/2V7Zrbh)  that my team had clearly formulated and submitted to Naftogaz’s supervisory board for its approval additional “questions” to Gazprom worth another $17.3 billion and that this had cause quite a stir.

Now I have the time and inspiration to explain about this in more detail.

Already tomorrow the Supervisory Board of Naftogaz is to consider the work of our team on how Naftogaz can:

– significantly increase revenues from gas transit;
– reduce the price of imported gas for Ukraine to a level lower than the European one, which will increase the competitiveness of industrial gas consumers, reduce public spending on gas, and, accordingly, have a positive effect on economic development;
– receive compensation for losses from operations with Rosukrenergo’s debt, which Naftogaz once suffered;

Yes, it may be necessary to force Gazprom to do things that are not in the interests of the Kremlin. For example, enable buyers of their gas to receive it at the Russia-Ukraine border, unblock gas transit from Central Asia, offer independent gas producers in Russia so-called “swaps” enabling them to export their gas through Gazprom. This is not to mention the sensitivity of the topic of compensation for Rosukrenergo.

But it’s all realistic to do, especially given the new opportunities that the new transit contract, which I signed with Miller in December 2019, opens up for us. Of course, Naftogaz must work effectively for this end.

For its part, our team began to work systematically on this almost immediately after signing a new transit contract.

– Already in early February 2020, I elaborated publicly the potential problems in relations with Gazprom, which we were then studying (https://bit.ly/2ykdG3y).

– In mid-March, I publicly announced that our team had completed a detailed analysis of the opportunities presented to Ukraine in connection with the signing of a new transit agreement under European rules, and that this analysis was submitted to the Supervisory Board of Naftogaz (https: / /bit.ly/2RDSnkw). I wrote at the time that it concerned about $25 billion over the next 5 years. $25 billion is the 17.3 billion mentioned above, plus $7.2 billion in guaranteed revenue from the new transit contract.

But not only we, but also our opponents work systematically. Now they are actively trying to instill the idea that “it’s all unrealistic.”

I recall that in 2014, Ukrainian and European officials, World Bank experts, and even international experts hired by Naftogaz, told me that it was unrealistic to expect to win against Gazprom in transit contract arbitration. But we did it. Similarly, I know also now that it is quite possible to realize these opportunities as regards the $17 billion dollars.
Because if there is political will, everything will be “realistic”.

At the same time, as the British say “talk is cheap” – it is better to judge by deeds, not by words.

In order to make it clear to everyone what our team, which I have the honor of directly managing, has already done, how different we are from others, and whether we can be trusted, I will use this post as an opportunity to report to you on the results of our work in 2019. I will also comment on some popular fake stories in this regard.
For your convenience, we used cards with simple infographics.

I would like to draw your attention to the national record for transit revenues, as well as to the fact that the profit produced by our team at Naftogaz is higher than the total projected profit of Naftogaz. That is, part of our profit goes to cover the losses of the rest of Naftogaz.

Profits in the area of ​​my direct responsibility, produced by our team, saved Naftogaz from losses in 2019, and without them Naftogaz would look like a “black hole” again.

People often ask, “Well, so what about these achievements?” Here’s what:

– Ukraine is becoming stronger, the chances for a successful end to the war for Ukraine and ensuring security for people and business are growing;
– A sense of dignity;
– Opportunities for corruption are not created;
– The gas price is lower than it would be without these results of our team’s work;
– The greatest positive effect is on the country’s economy and state budget revenues, respectively, and on the income of Ukrainians.

Since I am already reporting on the results of my work, I would like to thank here the members of our team. In particular, the employees of the divisions that are part of my business unit – in particular their heads, Alex Veden and Antonina Marchenko. I would also like to thank the lawyers of Naftogaz, led by Yaroslav Teklyuk, who provided legal support to our department; therefore, they are also part of “our team.” I should also mention the help from the Treasury headed by Roman Chumak, and the important role of the already “separated off” team of the gas transmission operator headed by Sergiy Makogon.

And thank you to everyone else who helped.

I would like to note that the record results in 2019 were a logical continuation of what the team I led achieved in previous years (2014-2018): gas supplies from Europe after the cessation of supplies from Russia, Stockholm arbitration, bringing the gas market closer to European standards, the beginning of corporate governance reform in state-owned companies, a genuine fight against corruption. I wrote more about this in a special project with Naftogaz v. Gazprom (http://bit.ly/2ThnNii). 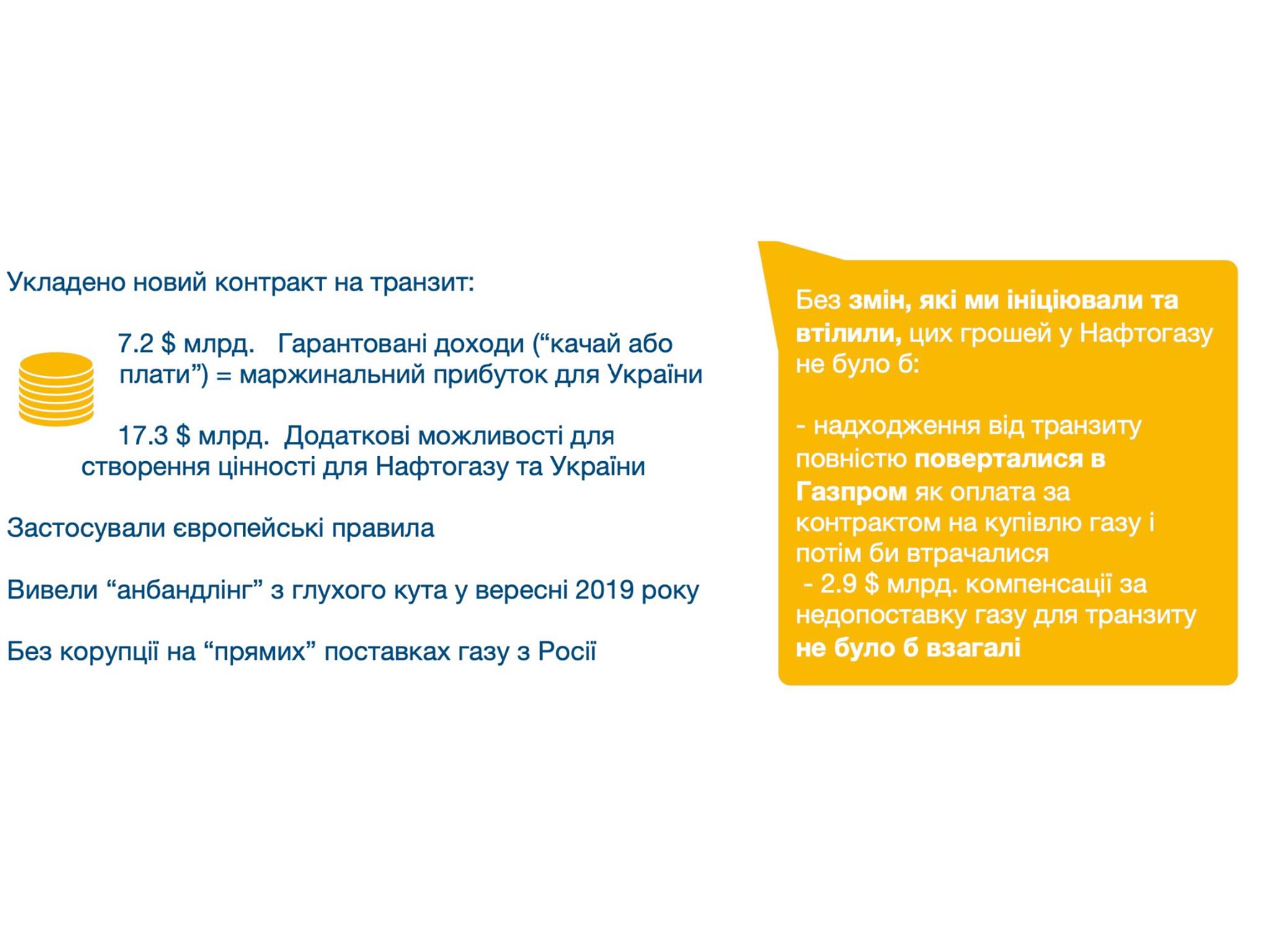