Big Money / The Economic Effect of the Commercial Operations Overhaul at Naftogaz. Spoiler: It’s Over 45% of Ukraine’s GDP

I cite these figures and facts first and foremost in order to demonstrate accountability. In other words, I want to report on how I delivered on the mandate given to me, so that you can see what warranted my salary and bonuses.

My responsibilities for the commercial activity of Naftogaz mainly covered gas import and transit operations. Previously, almost all of our gas had been imported from Russia under the Tymoshenko-Putin contracts. The same contracts covered gas transit services provided by Naftogaz to Gazprom.

Have a look at the difference between the sums that Naftogaz had to pay to Gazprom for gas supplies and the sums it was to receive for transit under these contracts  (the purple line on the diagram). Compare it to results achieved through the changes in our commercial operations – the difference between how much Naftogaz actually paid for imported gas and the sum it actually received for transit (the yellowish-green line on the diagram). 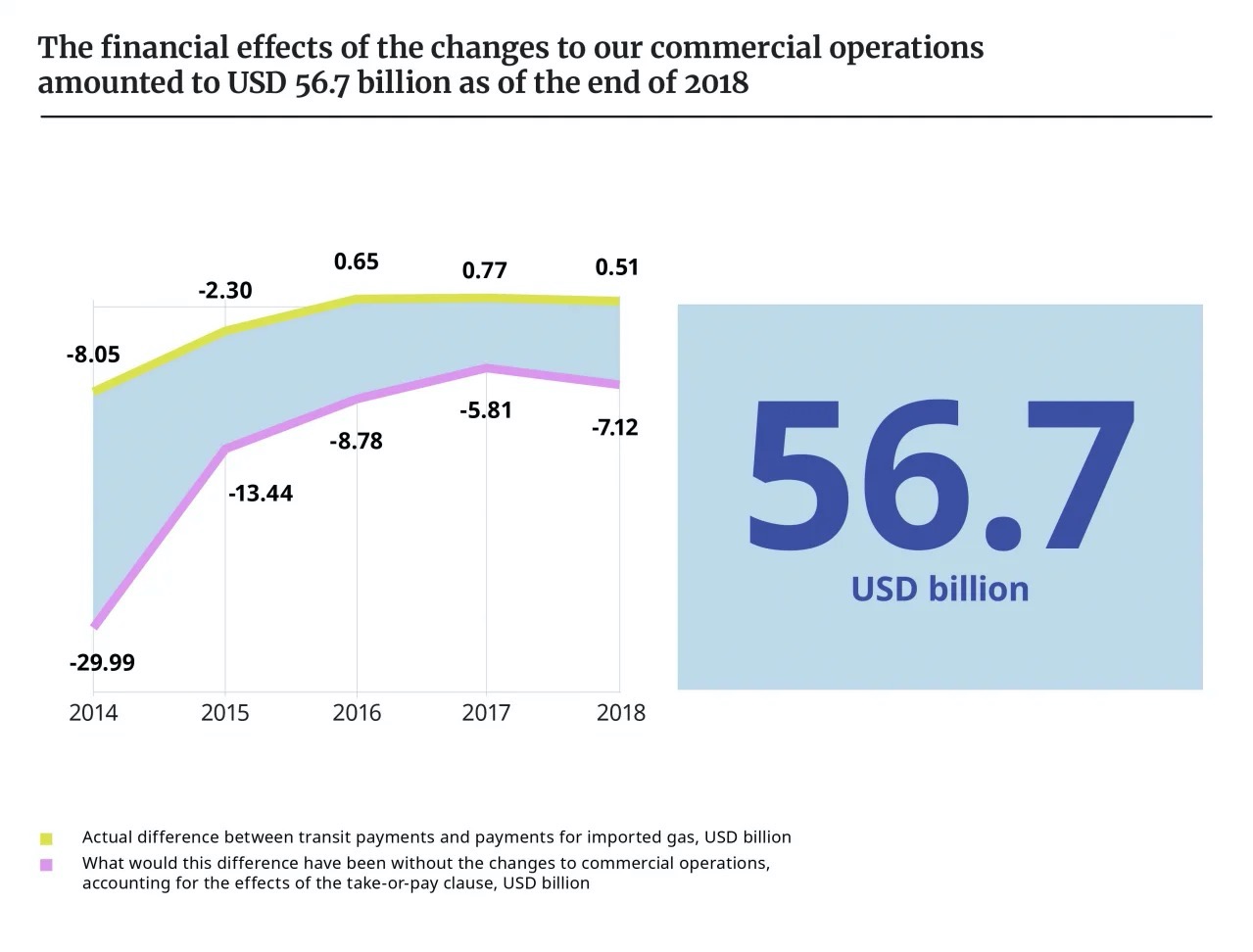 Thus, the financial effects of the changes to our commercial operations, which were my personal responsibility, amounted to USD 56.7 billion as of the end of 2018.

The financial effects of the changes to our commercial operations, which were my personal responsibility, amounted to USD 56.7 billion as of the end of 2018.

If we view this in the context of the size of Ukraine’s economy, we will see that the combined financial effect of these changes in Naftogaz’ commercial operations is equal to 45 percent of Ukraine’s GDP.

Besides, our team has opened up the following opportunities for Naftogaz:

2. The right to claim from Gazprom:

– USD 2.8 billion (including interest accrued by March 4, 2019) awarded to Naftogaz in the arbitration under the transit contract (meaning that we did not increase the debt to Gazprom – instead, it is now Gazprom that owes us money);

– compensation for the expected underdeliveries of gas for transit in 2018-2019 period (hundreds of millions of dollars);

– compensation for the failure to supply gas by Gazprom at a reduced price under the supply contract for the 2018-2019 period (hundreds of millions of dollars).

But what were the alternatives? Saying we cannot pay, so let us try to settle this some other way?

As far as I understand, attempts to this effect were indeed made. However, Russia’s only response was to issue us an invoice. And as soon as Naftogaz failed to pay the full amount invoiced, Moscow pointedly cut off gas supplies to Ukraine. It became plain that Russia supplemented its direct aggression against Ukraine with using the energy sector as a weapon in its hybrid war. The Kremlin was convinced that Kyiv had no alternative to Russian gas and would have no other recourse than to crawl back on its knees and beg for supplies to be resumed. But we found an alternative and turned the tables on Russia.

Let us look at the following analogy. Imagine that you are a bakery owner, and that you have a contract with a big shop that sells you flour while also buying part of the bread you bake for sale. You are losing money on this contract and you have run up a huge debt already, but you cannot terminate the contract. You have tried negotiating better terms, but it did not work. Therefore, you hire a professional manager to help you get out of this difficult situation. The manager introduces a number of systemic changes, including initiating legal action and developing relationships with alternative suppliers of flour, to help you not only stop losing money on the contract with the big shop, but also to begin getting real profits; and it is now the other party to the contract that owes money, not you.

What we did at Naftogaz was similar, although in our case, the problem-causing party to the contract was not a shop, but the powerful Gazprom, backed by none other than Putin.