0
Yuriy Vitrenko Library Why Naftogaz Is...

Why Naftogaz Is Essential to Ukraine’s Freedom and Sovereignty

Why do national companies exist?

A national company is not just a state-owned company. It is a commercial entity which exists to act in the interests of the entire nation. It is an element of statehood, a means of safeguarding the country’s sovereign development path. Such a company provides the nation with the means to realise its will and its economic interests.

How does a national company relate to the government?

International standards of corporate governance even recommend adopting a special document – a state ownership policy – which would outline the strategic importance of national companies and specify key objectives for their work.

Who owns a national company?

A national company is owned by the state. But state ownership not mean ownership by politicians or state officials who exist apart from the people “somewhere up there”. The state means all its citizens, millions and millions of Ukrainian families. They are the ultimate beneficiaries of Naftogaz as a national company – ultimately, it belongs to them.

Within this framework, the state has to act as a player and a judge, a market participant and a regulator. This duality needs to be resolved through legislation, by distinguishing ownership functions from government decision-making.

And yet the role of the citizens is not limited to passive observation of the company’s market behaviour. They must exercise control over the government, while the government – by implementing international standards of corporate governance – must ensure that the company is being managed in the same way as modern multinational corporations.

Is a national company always necessary?

When no external threats exist, when an external force is not trying to impose its will on the whole nation, a state can do without a national company.

But when the nation’s ability to forge its own path is under attack, a national company is an effective instrument for defending the nation’s economic interests and ensuring the sustainability of its sovereign development.Does international experience confirm this?

Let’s have a look at the oil and gas industry, which often becomes an arena where external threats to the nation’s development must be countered. The vast majority of both developed and developing countries have national energy companies in this sector.

Looking at mission statements for national oil and gas companies, we can see that they also actively support the government when the market is experiencing a process of transformation. 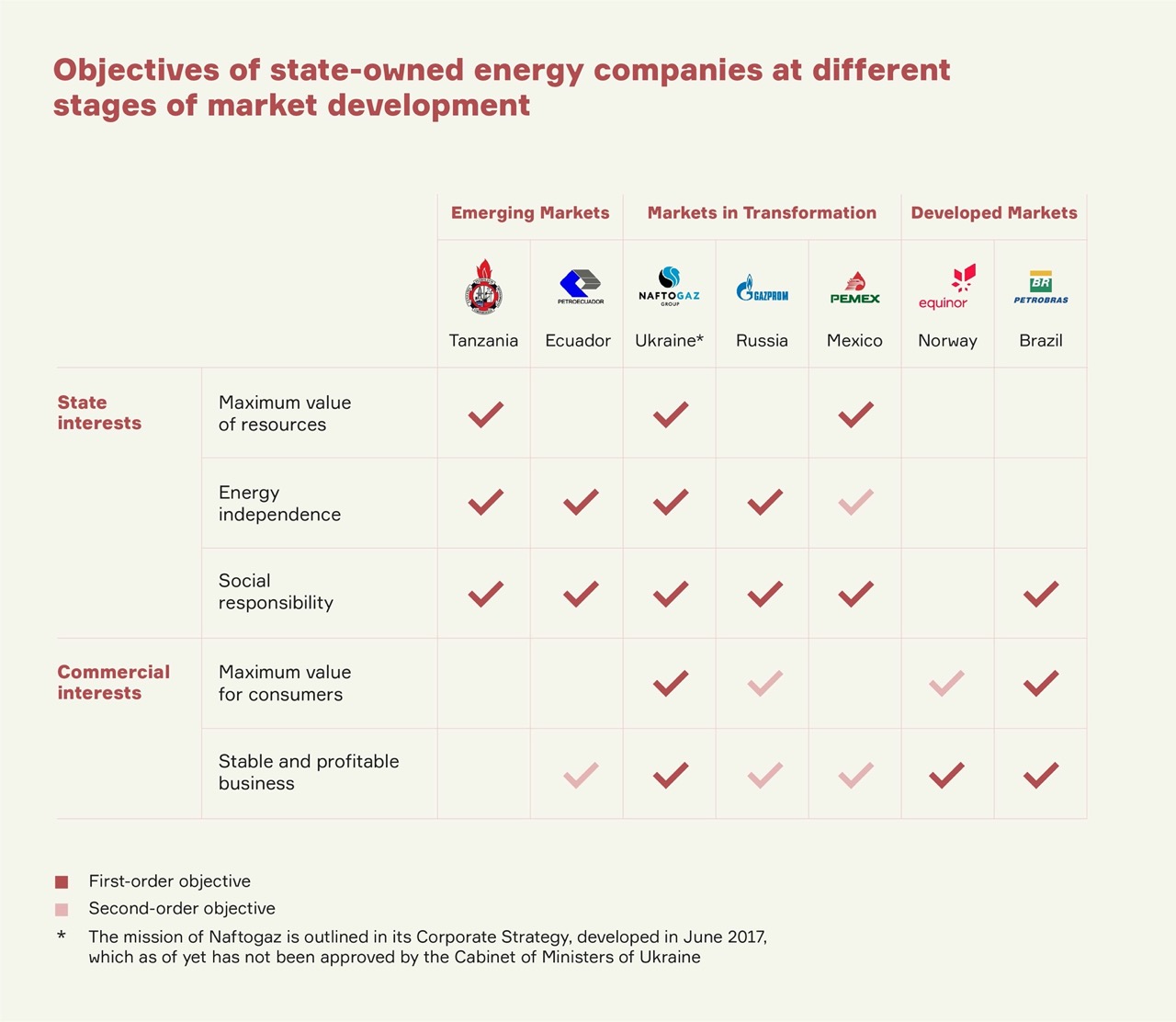 Should a national company be profitable?

A modern national company is a commercial enterprise. Like any other commercial entity, it has to earn money for its owners – the Ukrainian people.

It is quite simply wrong for a national company to be chronically in the red. Its earnings should allow it to give its owners a market return on the capital which has been invested.

A profitability gap between national companies and their privately-owned competitors actually means every citizen is a loser. These losses benefit only the privileged – because the tab gets picked up by all taxpayers.

Sustainable profitability is subject to proper management of the company, which is best ensured by application of international standards of corporate governance.

A focus on market-level return on invested capital is especially important for countries whose populations are getting older. Countries with an ageing population cannot afford a return on public assets which is below the market level, since they have to meet such social obligations such pensions and health care.

Is Naftogaz a national company?

In 1998, the State Committee of Oil and Natural Gas was reorganised into the national joint stock company Naftogaz of Ukraine to ensure more efficient management of oil and gas assets still owned by the state. This became an important factor in the sustainable development of the country’s oil and gas sector and the strengthening of its sovereignty.

Naftogaz’s natural role as a national company is to be an efficient mechanism for reform, in particular by defending Ukraine’s economic interests in the oil and gas sector against external threats.

It is a national company which should act in the interests of the Ukrainian people and state. Contrary to allegations made about it, Naftogaz is not a useless intermediary. Rather, it is a centre of strategic management and control.

It permits significant cost savings owing to centralised natural gas marketing and billing. Naftogaz is also the contracting party in contracts with Gazprom. As such, it initiated proceedings against that company in the Stockholm arbitration court and won billions of dollars. That is why Naftogaz’s opponents, first and foremost with geopolitical interests, are so eager to try to eliminate it.

As a national energy company, Naftogaz can serve as a useful instrument for the government in creating an efficient gas market. It can be a convenient platform for rolling out new initiatives aimed at market transformation, while ensuring an uninterrupted energy supply to end users.