0
Yuriy Vitrenko Library How We Shook Of...

How We Shook Off Gazprom’s Dominance

The gas market reform stands out from the rest of them because its key elements are not only successful but also largely irreversible. It also became a vivid example of how Naftogaz not only helped the country but actually created an efficient market in place of what had been a monopoly.

Unfortunately, there has not yet been much competent research into how this story developed, which is why there is a lot of misunderstanding surrounding what happened.

As I have already mentioned, up until 2014, Ukraine’s wholesale gas market was nominally dominated by Naftogaz. However, the real monopolist was Gazprom, as it was Gazprom that set prices on this market, lowering them down to European levels only in exchange for political concessions on the part of Ukraine – concessions that eroded Ukraine’s statehood. 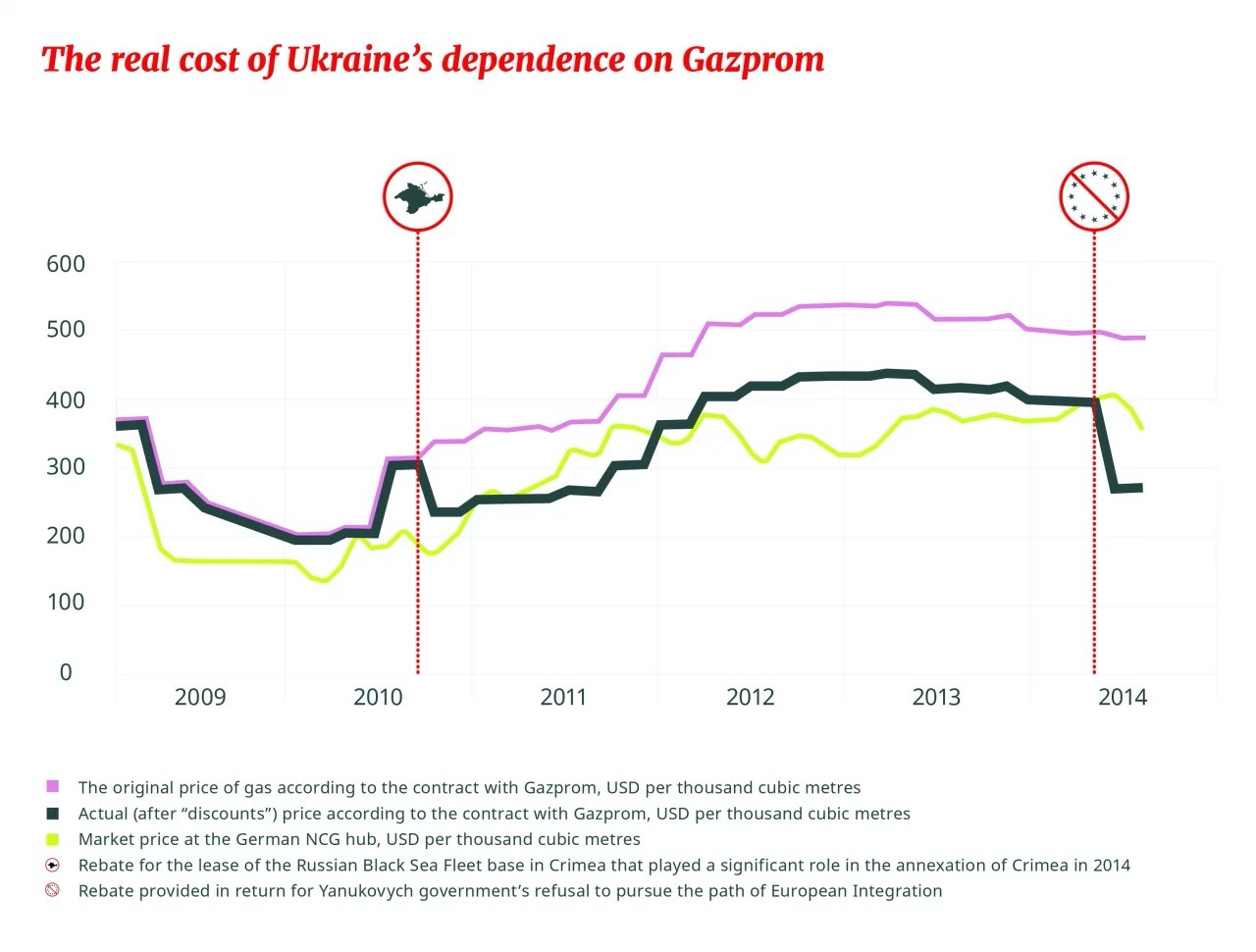 Since prices were determined by non-market factors, companies could not predict them and manage price risks.

There was no free access to the gas transmission system for gas importers or even for independent producers – it was all about “reaching a private understanding” with someone in high places.

There was also the fact that imports from Europe were a bottleneck because capacities were lacking.

Currently, the situation is fundamentally different: Ukraine’s wholesale market is truly integrated with the European market, covering Slovakia, Poland, Hungary, Germany, Austria, and the Czech Republic. For Naftogaz, it is what is known as the relevant market – a market where a company provides services, sells goods, and competes with goods and services offered by other companies.

The Naftogaz Group does not dominate this unified market – for example, it cannot economically set prices which would be higher than the current market price. Prices are predictable and are determined by the dynamics of supply and demand on the European market, not by Gazprom. The price on the wholesale market is also much lower than what it would be if it were still determined by the contract with the Russian company. The peak difference for this period was UAH 4 000 per thousand cubic metres. 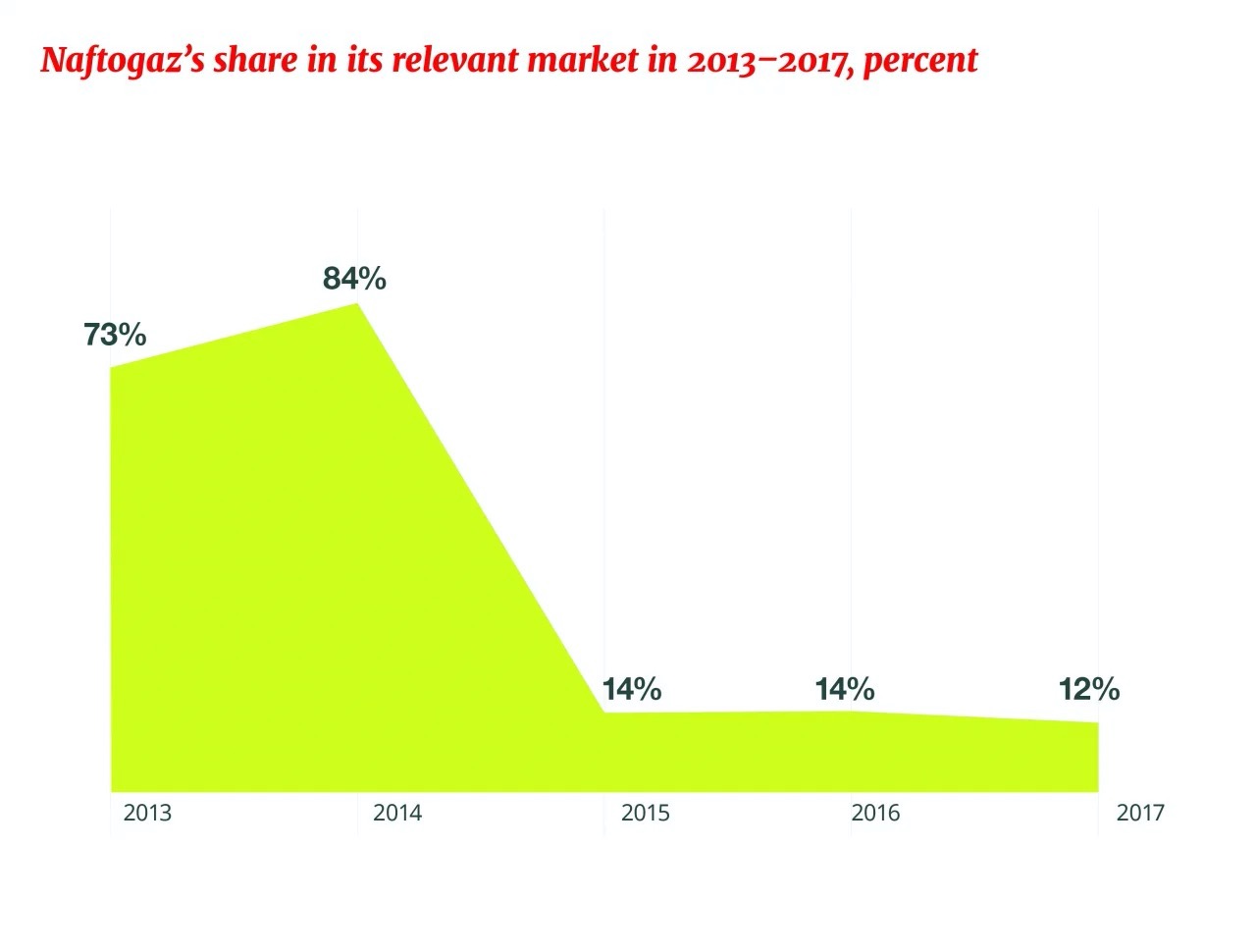 If we sit down and do some calculating, this means that the Ukrainian industry has been able to save over UAH 30 billion due to this price difference. A situation where prices on the Ukrainian wholesale market are much higher than European prices can hardly repeat itself ever again. All of this is very important for the competitiveness of the Ukrainian industry.

We have been able to radically turn around the situation on our gas market, primarily due to the construction of new pipeline interconnector for importing gas from Slovakia, as well as signing a contract with Statoil.

Yes, Naftogaz was the first to benefit from these new possibilities. But we have also opened up these possibilities for everybody else.

An important milestone was the adoption in 2015 of the Law on the Natural Gas Market. This document was a transposition – in other word, a bill aimed at implementing European gas market directives in Ukrainian legislation. Ukraine has thus finally adopted for itself the rules that underpin the European market – at least nominally.

The bill was initially developed by the Energy Community Secretariat – the European institution whose purpose is to facilitate the adoption of European energy acquis in countries that have joined the Community (like Ukraine did).

The draft was submitted to the Parliament by the Cabinet of Ministers of Ukraine, and the MPs voted it through.

So what was our role in it?

Before we started promoting the adoption of this law, there was a common belief that it would be impossible to implement in Ukraine due to certain technological peculiarities. A different bill was being lobbied for – one that would have created a mere appearance of changes.

Fortunately, there was a fellow proponent of introducing European practices who was part of the government at the time – Ihor Didenko, Deputy Minister of Energy responsible for the gas sector.

He organized a consultation during which we were able to personally assure everyone that there were no “technological peculiarities” that would preclude adopting this law, and provided specific evidence that European regulations could work in Ukraine, too.

There was another factor, namely, that Naftogaz had the will and the means to make sure that market liberalization would not jeopardize the security of the supplies. Among other things, this was possible due to the degree of European integration that had already been achieved by then.

Liberalization, or dismantling of the old system, must be compensated by efficient market mechanisms.

People often forget this – that liberalization, or dismantling of the old system, must be compensated by efficient market mechanisms. And that there needs to be an effective mechanism in place that would serve as a failsafe against any malfunctions in the new system, especially if they would endanger people’s ability to meet their basic needs.

The Law on the Natural Gas market is part of the so-called “primary legislation.” In order to ensure its full implementation, there is a need for the so-called “secondary legislation,” which consists of regulatory acts adopted by the market regulator (the National Energy and Utilities Regulatory Commission, or NEURC), the Cabinet of Ministers, and the Ministry of Energy.

The matter of secondary legislation has turned into a battlefield where Naftogaz is wrestling with the Dmytro Firtash Group. The latter controls almost the entire distribution and end sales network, while also wielding major influence over government agencies.

So far this has been an uneven contest, and we can boast only occasional victories due to a confluence of factors that included our being prepared, active help on the part of international partners and/or understanding of the critical nature of the situation on the part of the Ukrainian authorities.

But even what has been achieved has moved the rules in the Ukrainian market much closer to European rules, which played an important role in the subsequent integration of the Ukrainian and the European markets.

At the same time, because Ukrainian rules were not up to European standards, we have lost a lot of opportunities. For instance, we were unable to prove that even by all formal measures the Ukrainian market is functioning the same way that the European one does. This would have increased trust in it both on the part of our international partners and inside Ukraine. In turn, had it not been for these problems, our win in the Stockholm arbitration proceedings could have been much bigger.

For instance, had it not been for the obvious fact that the NEURC’s work is not up to European standards, the arbitrators might have agreed with our position that bringing the gas transit contract in alignment with Ukrainian energy legislation would not contravene the laws of Sweden as an EU member. Among other things, this would have allowed to successfully complete the unbundling of the GTS operator and, more importantly, to apply the tariffs set by the regulator. This would have increased our award for the years 2009–2017 from USD 4.6 billion to  USD 11.4 billion (that is, by UAH 12 300 for every Ukrainian household).

Another example. If the Cabinet of Ministers had not imposed special obligations on Naftogaz, the price of gas sold by Naftogaz to households could have been set at the level of German prices minus the cost of transportation from the Russian border to the German border (the so-called “netback” or “hub minus transportation”). This could have been put forward as evidence of what the Ukrainian side considers to be a fair price for gas imported from Russia and hence the market price for gas in Ukraine, assuming the absence of anti-competitive actions on the part of the Russian Federation. Thus we would have had a better chance of convincing the arbitral tribunal that the word “corresponds” used in the gas supply contract with Gazprom (in the clause that stipulates Naftogaz’s right to have the contract price adjusted if it does not correspond to the level of prices in Europe), given the context of the negotiations, can also mean “is equal the price at the hub minus transportation costs from the Russian border to the European market.”

How would that have benefited us? We could have won USD 22.7 billion rather than USD 1.8 billion from the price adjustment (which would translate into UAH 37 600 more per each Ukrainian household).