Stockholm Arbitration: How It Went Down

Proceedings that lasted almost four years – years that proved gruelling to the country, to the Naftogaz team and to me personally.

Proceedings in a dispute with a price tag in excess of USD 125 billion – such was the cumulative disputed value from both sides, unprecedented in the history of commercial arbitrations.

Proceedings that could determine Russia’s ability to saddle Ukraine with crippling debt, that were a major battle for Ukraine’s economic viability – as a sovereign state and for our country’s resolve to pursue European integration.

Such were the stakes in the Stockholm arbitration case.

In a way, Sweden became another front line in the fight against Russian aggression – a front line that may have appeared calm and casual to an outside observer, and yet one that was extremely tense and crucially important.

At the outset, hardly anyone believed we stood a chance in Stockholm. Even Naftogaz’s own staff and our international partners held out little hope for victory. Lawyers and experts believed that it would be a great success if we could even fend off Gazprom’s claims under “take-or-pay” obligations.

At the same time, dozens of Naftogaz employees were also involved, either directly or indirectly.

Naftogaz had never before won a case in the Stockholm Tribunal. The company was zero for two in previous cases, one of which pitted Naftogaz against RosUkrEnergo, while the other was “Italia Ukraina Gas S.p.a.” dispute. This made our prospects seem even dimmer.

On the other hand, we have learned a lot from this experience. Expecting the worst, we prepared accordingly. We understood that our opponents would challenge our legal position, while also working behind the scenes to change the composition of Naftogaz’s team that was engaged in this fight. Thus, we decided that our best defence was to make what we were doing as public as possible, if we were to expect any outside support.

From a management strategy perspective, it is best to underpromise and overdeliver. In our case, that meant not divulging the total amount of our claims against Gazprom. But we felt we had no choice – it was important to make clear how much a betrayal would cost the Ukrainian people.

We met some challenges right off the bat, and the pressure never eased up until the very end. Every stage started out with the whole team – the lawyers and I – sitting down for a few days to discuss and plan out our course of action. Then, each one of us would prepare our assigned part of paperwork, and lead counsels would assemble our work into a single document. We would then revise and refine it before submitting it to the Arbitration Tribunal.

Those were veritable treatises, both in size and in content: concepts, arguments, counterarguments, witness statements, expert conclusions, economic calculations, interpretations of the applicable laws. All of this had to jibe, be consistent, and advance our strategic and tactical aims. 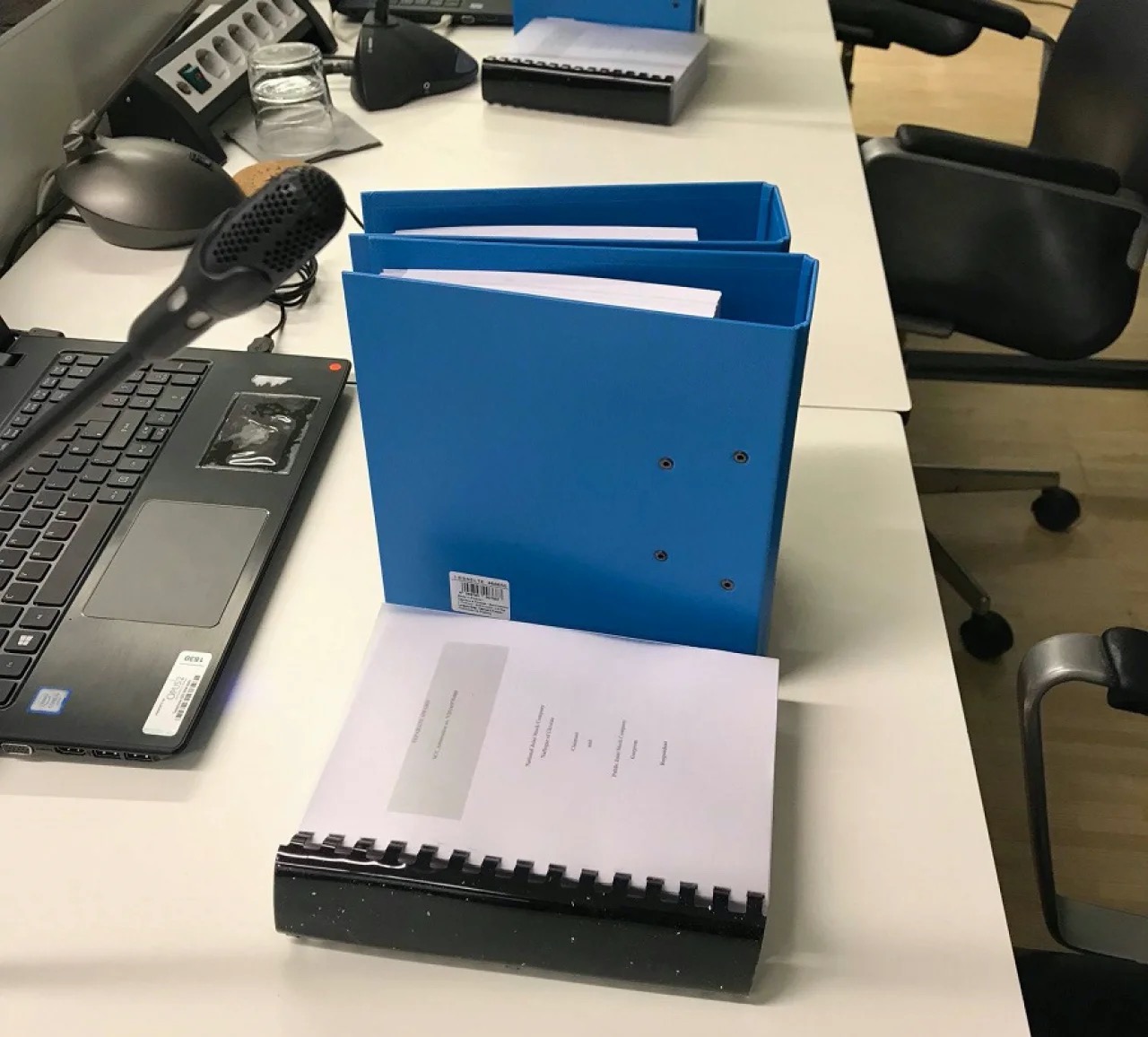 Our lead counsel was Norwegian lawyer Dag Mjaaland. He signed documents that were submitted to the Tribunal. Technically, Naftogaz was directly represented in Stockholm by two people with equal authority for the purposes of arbitration – Yaroslav Tekliuk and me. I was responsible for the arbitration outcome in general, while Yaroslav was in charge of the legal side of the matter. That is, I worked more on a substance of the arbitration, while he worked more on a legal basis.

It all started when I went to our legal team and said: “We need to lodge a claim about our transit contract. Gazprom is paying too little for gas transmission

Let us take proceedings on the transit contract as an example. It all started when I went to our legal team and said: “We need to lodge a claim about our transit contract. Gazprom is paying too little for gas transmission, and we have the right to demand a revision of our transit tariff to the level of tariffs in the European market.”

The legal team responded that, according to the contract, Naftogaz did have the right to demand a tariff revision and claim damages – but for that we would need experts to confirm calculations. And it turned out that, back in 2010, the experts engaged by us for the supply arbitration, had already looked at our tariff and how it compared to European rate, back in the day at Gazprom’s request, – and concluded that everything was OK.

I had to do a great deal of persuading. I had to explain a number of technicalities that Gazprom had conveniently left out, causing the experts’ analysis to be incomplete. I had to lay out a number of calculations.

These discussions took months, but eventually the experts concurred.

This was the starting point of the 4-year-long arbitration proceedings on the gas transit contract. My role was to make key decisions with regard to the content of our claims, manage the development of the evidence database and the elaboration of counter-arguments to Gazprom’s responses. I would also testify as a witness and make statements before the Tribunal, all the while being responsible for the coordination of implementing European principles in Ukraine.

One of the surprises was the location of the hearings. Since this is an arbitration tribunal and not a regular court, there is no courtroom as such. There are a number of office buildings in Stockholm where parties can rent facilities for hearings, for their legal staff and for use by the arbitrators. 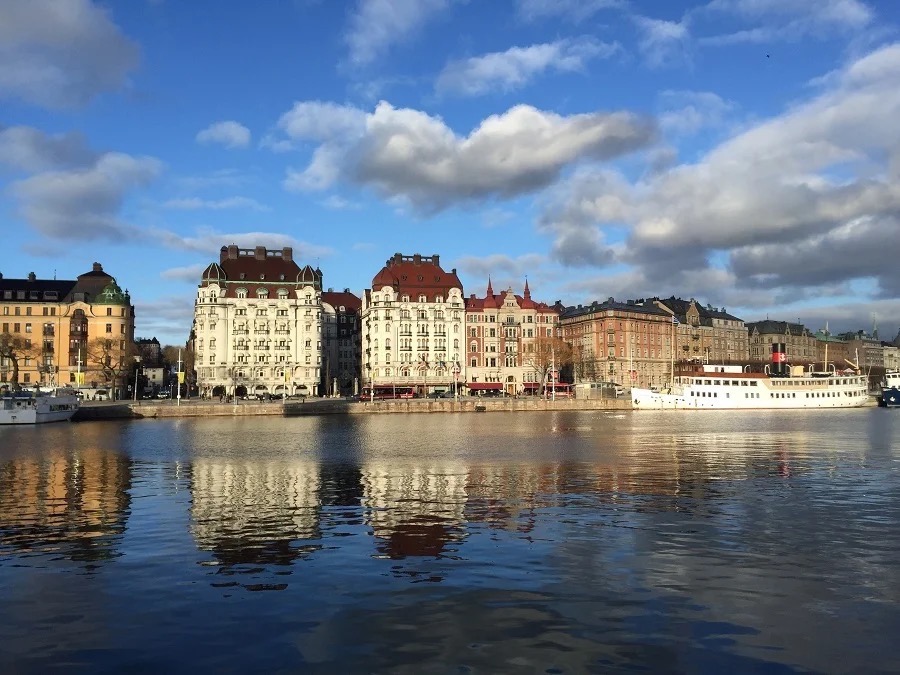 There were three arbitrators. Together, they made up a tribunal. All of them were pleasant, calm, very intelligent people of spotless professional reputation. One of them, a lawyer from Denmark, was nominated by us. Another one, a former head of the Supreme Court of Sweden, was nominated by Gazprom. The latter was the arbitrator who had ruled in favour of RosUkrEnergo in its dispute with Naftogaz back in the day. Another Swedish lawyer was appointed Chairperson of the Arbitral Tribunal.

Naftogaz and Gazprom’s teams both consisted of legal staff, experts, and witnesses. My counterpart who headed the Russian team at the time was Deputy Chairman of Gazprom Alexander Medvedev, responsible for the Russian company’s international business development.

What followed was typical for any courtroom: opening arguments, questions from the opposing party and the arbitrators, witness testimony, closing arguments.

The only difference was in scale. For example, an opening statement could last an entire day. Written testimony could span dozens, even hundreds of pages. Closing arguments – again a day for each party.

Each hearing would take over two weeks. Irrespective of the schedule of direct meetings, we stayed in constant preparation mode, whether we were in Kyiv or in Oslo.

During these proceedings I discovered, to my amazement, that not many prominent Ukrainians who make themselves out to be defenders of their homeland were actually prepared to act on their word. Even if they head political parties with patriotic names. Of course, I am referring to Yulia Tymoshenko.

Yulia Tymoshenko, who led the negotiations with Putin in 2009, refused to testify as a witness on our side.

Yulia Tymoshenko, who led the negotiations with Putin in 2009, refused to testify as a witness on our side.

We were trying to prove to the Tribunal that the then Prime Minister could not have negotiated conditions that were worse than Gazprom itself had offered earlier – the price in Germany minus the cost of transporting gas from Russia to that country. So, when Naftogaz was signing the contract on conditions agreed between Tymoshenko and Putin, the Ukrainian party interpreted the reference to European prices in the price revision clause to mean that the contract formula cannot result in the price being higher than the aforementioned reference (i.e. the price in Germany minus the cost of transit).

Unfortunately, it was not stated in the contract outright, and without Tymoshenko’s testimony, we were unable to prove this point. Thus, the Tribunal did not receive sufficient evidence to support the assertion that the Ukrainian Prime Minister could not have agreed to terms and conditions that were even worse than Gazprom’s initial offer.

Despite those setbacks, we gradually started to realise that we were on the path to victory. We were sensing that we had moved forward one more step… then another one… and another. The tension would not let up till the very end, until the moment the battle was won. And yet even the “moment of triumph” came in stages – we had to wait for two rulings on the gas contracts and a separate ruling on transit.

There was some nervous laughter: “At least while we are here, they cannot arrest us right away if we lose.”

We were notified about the date and time on which the first ruling would be handed down in advance, so we were waiting for it in Oslo. There was some nervous laughter: “At least while we are here, they cannot arrest us right away if we lose.” 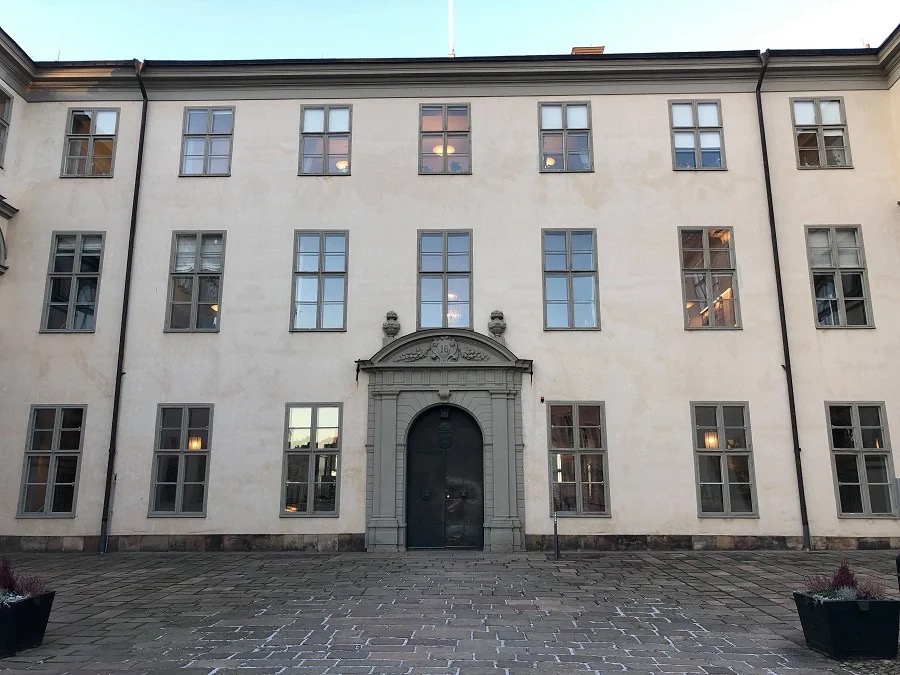 The Svea Court of Appeal. Photo courtesy of Yuriy Vitrenko.

After receiving the nearly thousand-page ruling, we immediately began reading it with feverish intensity. We were looking for the most essential thing: the principles under which take-or-pay obligations could be enforced. If the Tribunal had taken Gazprom’s side on this matter, Ukraine would have lost approximately USD 80 billion. This loss could not possibly have been balanced by wins on other claims.

It was only when we saw that the Tribunal had accepted our arguments that we understood: we were victorious.

The part of the arbitration award that prescribed a reduction in price made this a double victory. We hosted a celebratory dinner with the team. A separate toast was dedicated to the fact that we had not been arrested after all.

Now, with all these outcomes already well-known, I realise that some things could have been done differently.

For instance, the Tribunal refused to hear the matter of gas transit rate revision because of a technicality: it did not deem a letter sent by Naftogaz in 2009 (and containing a request for rate revision) to be compliant with all formal requirements.

Having read this, our lawyers drew up a new request that met all the requirements. This letter will now be a part of new arbitration proceedings, which I hope will result in a revision of the transit rate. Better late than never.

But those are matters for another day.
The stakes in the Stockholm arbitration proceedings 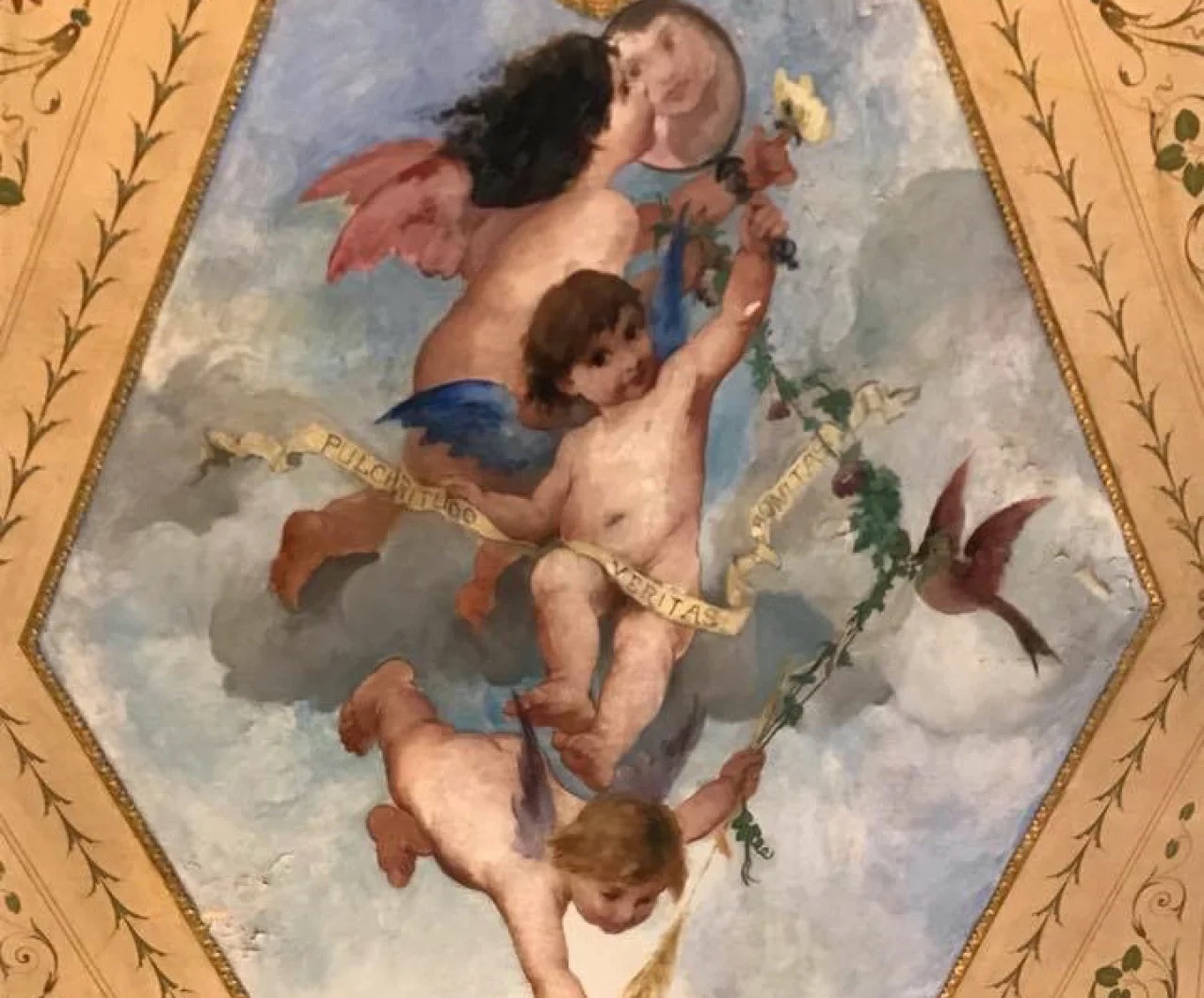 The ceiling in one of the rooms where proceedings took place in Stockholm. Photo courtesy of Yuriy V

The human memory works in mysterious ways. The four years that the arbitration proceedings lasted were a whirlwind of various experiences and impressions.

But what has stayed with me most are the words I accidentally saw on the ceiling of the very room where the Tribunal later handed down our victory.

It was a painting of little angels holding a ribbon with an inscription, “Pulchritudo, Veritas, Bonitas.” Which means, “Excellence. Truth. Goodness.”

I think those were exactly the principles that assured our victory in the end.