Claim #1: Revising the take-or-pay provisions of the contract and bringing them in line with European standards

In the arbitration proceedings, Gazprom presented a claim for Naftogaz to pay for the volumes of gas stipulated in the “Tymoshenko contracts” irrespective of whether we have off-taken them or not.

As the Tribunal rendered a separate ruling on this clause in mid-2017, Gazprom was technically only allowed to present claims for the period up until the end of 2016, and the total amount claimed under the clause was USD 44 billion. Gazprom also demanded that this provision remain in place, unchanged, until the contract runs out in 2019.

At the time of the contract’s expiration, in 2019, the amount would be almost USD 80 billion. This makes it pretty clear why the take-or-pay provision of the contract was deemed unconscionable.

If one calculates the amount Ukraine would have to pay in this case, by the end of 2017, it would have reached USD 56 billion, or almost half of Ukraine’s GDP. That is, it would have grown by USD 12 billion in 2017 alone. At the time of the contract’s expiration, in 2019, the amount would be almost USD 80 billion. This makes it pretty clear why the take-or-pay provision of the contract was deemed unconscionable.

Inside Ukraine, decision-makers largely did not want to recognise this problem or deal with it, but that did not make it go away, since Gazprom’s claims were based on the obligations Ukraine took upon itself when it signed the contract. They were right there, written in black and white.

Besides, take-or-pay clauses are standard for almost all long-term gas supply contracts in Europe. No one would have allowed us to simply ignore the provision. In other words, were we to unilaterally disregard the take-or-pay clause, however unfair we deemed it, this would have inevitably lead to Naftogaz’s bankruptcy and triggered lawsuits against Ukraine.

We had eight “lines of defence” in our arbitration action against Gazprom’s claims under this clause.

This claim was granted practically in full.

Thanks to the arbitration ruling, we do not have to pay Gazprom a single cent for the volumes of gas that were not off-taken in the period leading up to the rendering of the Tribunal’s decision on revising the take-or-pay provision to better reflect European practice (that is, until the end of 2017).

This is the first instance that I know of in the history of European long-term contracts that obligations under a take-or-pay clause for preceding periods were found to be unconscionable and were reduced to zero. 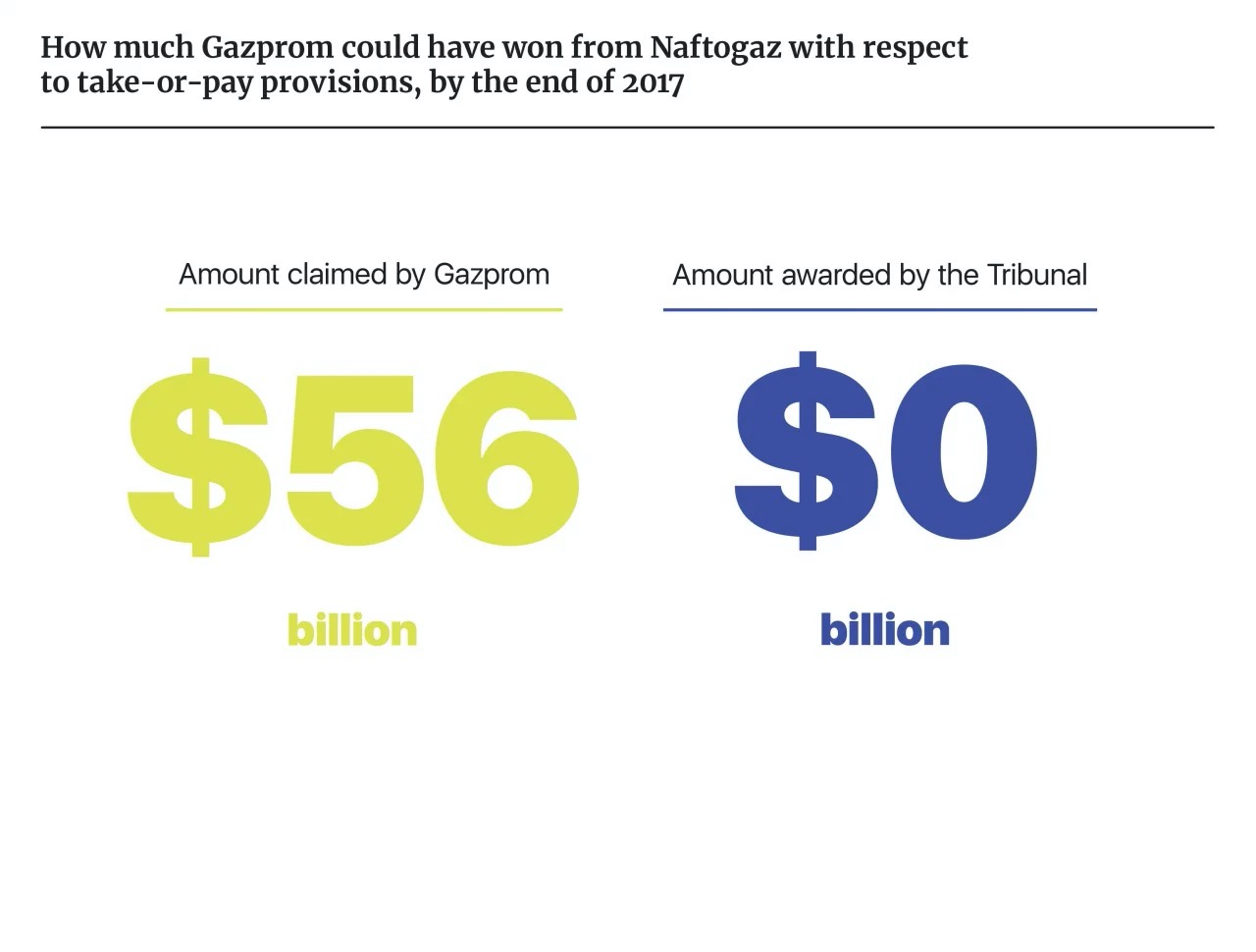 For 2018 and 2019, the years for which the take-or-pay provision is valid in its revised form, the Tribunal has reduced the volumes to be off-taken tenfold, so that, as is European practice, we would not be obligated to purchase from Gazprom more than half of our annual demand for imported gas.

The Tribunal’s ruling also gave us the right to re-export the gas as well as defer its off-taking to later periods.

In April of 2014, Russia revoked all of its “discounts” (the “Kharkiv Treaty” that had to do with the lease of the Russian Black Sea Fleet base in Sevastopol, and the discount agreed between Putin and Yanukovych at the end of 2013 in exchange for Yanukovych’s backtracking on Ukraine’s European integration). This caused the price of gas to jump from USD 269 to USD 485 per thousand cubic metres.

The government of Arseniy Yatseniuk considered the termination of the discounts to be illegal. External legal advisors also saw enough grounds to demand that the discounts be reinstated. But the Tribunal did not uphold this position.

In retrospect, it was quite fortunate that our team at Naftogaz saw the situation a bit differently. We decided to hedge our bets and set out a claim to reduce the price down to market levels rather than focus on reinstating discounts.

Ideally, we wanted to have the price reduced to the level of prices in Germany minus the cost of transportation.

Our argument went as follows: Gazprom had publicly offered this price before the Tymoshenko-Putin negotiations of 2009. This initial offer should have been taken as the basis of interpretation for the clause on price revisions to the market-level gas prices in Europe.

However, our price revision claims were granted only partially. Unfortunately, the contract had nary a mention of the need to deduct the cost of transporting gas from Russia to the European market. So, we were only able to substantiate our claim to the price equal to that in Germany.

Not accounting for the cost of transportation was one issue, but the Tribunal also interpreted the “Kharkiv Treaty” discount as an instance of a price-revision. Neither of those decisions played in our favour.

And yet we were able to achieve a very significant price reduction. 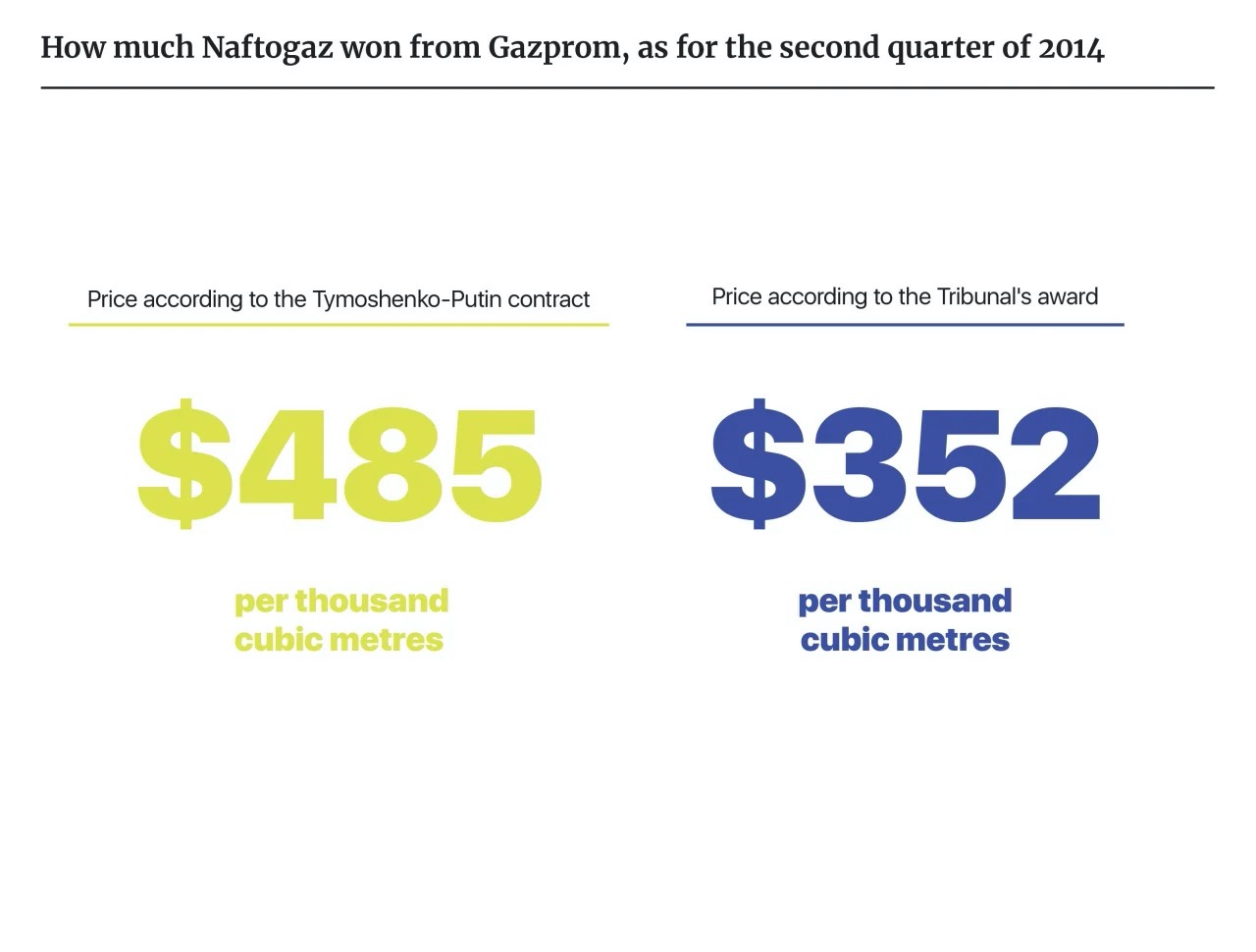 If the Tribunal had awarded our claims for price reduction in full, we would have received compensation from Gazprom for overpayments made before 2014. This could have amounted to USD 15.8 billion.

Which is to say, we could have been even more successful in our action if not for some formal peculiarities of the political agreements between Tymoshenko and Putin, as well as Yanukovych and Putin.

From 2009, there was not a single year in which Gazprom fulfilled its obligations with respect to volumes of transit, and the transit tariff was never adjusted. That meant foregone earnings for Naftogaz. So, we decided to demand compensation.

We also decided to seek relief that would bring the contracts in alignment with regulatory changes. This was necessary in order to unbundle the gas transmission, as Naftogaz would need to assign its rights and obligations under the transit contract to the unbundled operator. 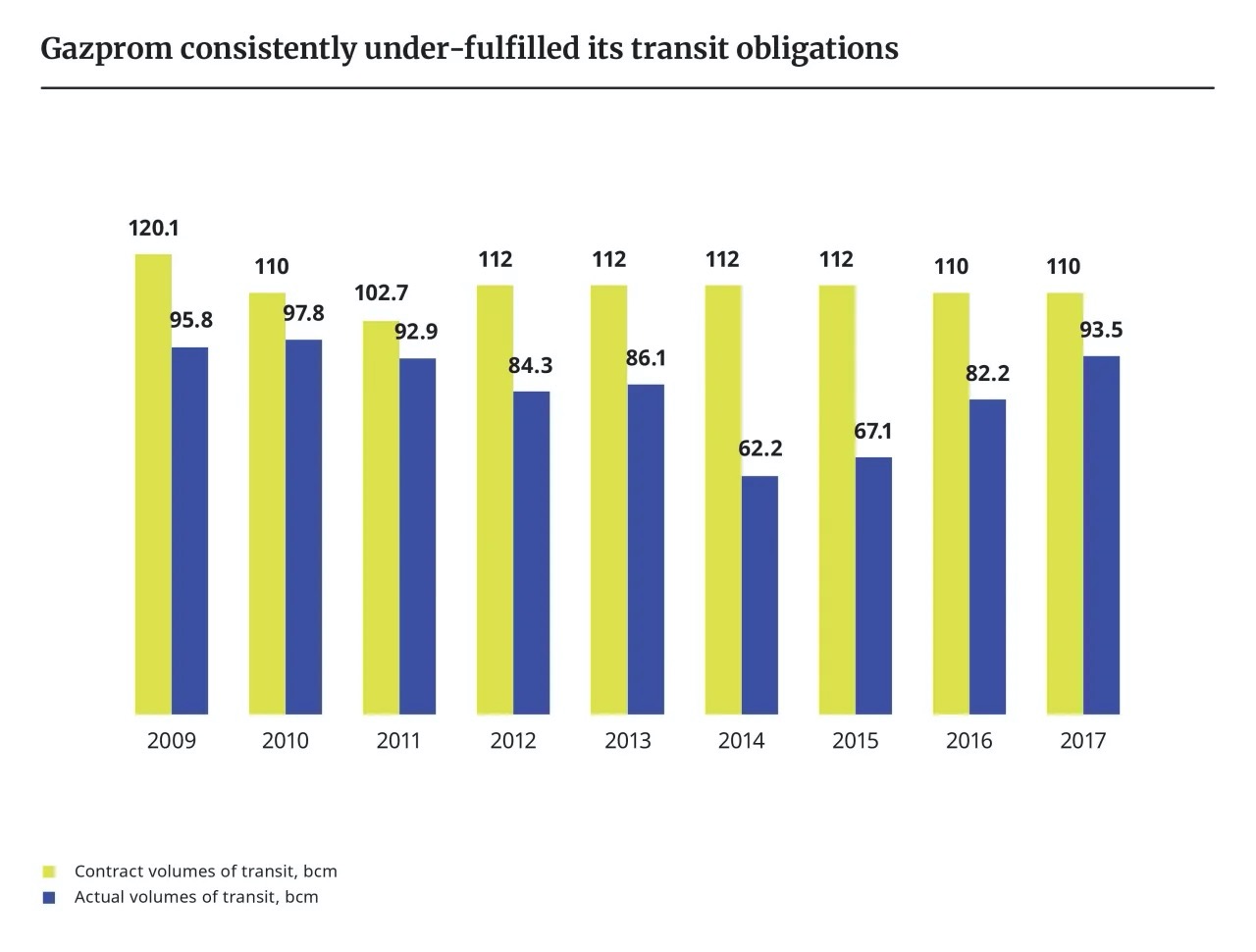 Unfortunately, before the Tribunal’s ruling, Naftogaz had only once, in 2009, submitted a formal request for revision of the transit tariff. The Tribunal found that the letter outlining the request did not comply with the contract requirements. If not for this regrettable technical shortcoming, Naftogaz could have been awarded compensation of up to USD 17.2 billion.

According to publicly available data, this is the largest compensation amount ever awarded in an arbitration of a dispute between gas companies.

At the sаme time, the Tribunal confirmed that Gazprom had violated its obligations with respect to transit volumes, which should have been in the range from 103 to 120 bcm annually for the 2009–2017 period, and awarded us compensation in the amount of USD 4.63 billion. According to publicly available data, this is the largest compensation amount ever awarded in an arbitration of a dispute between gas companies.

The matter of aligning the transit contract with regulatory changes was deemed to fall within the scope of the Ukrainian regulator’s authority.

In Total: What did Naftogaz gain and Gazprom lose?

As of February 2018, when the Tribunal’s award in the gas transit case was rendered, the total positive financial effect from the arbitration, meaning the amount of money that Naftogaz won and Gazprom lost, amounted to USD 85 billion.

How significant is this? Even if we take just the outstanding amount that Gazprom is obliged to pay to Naftogaz – USD 2.8 billion (USD 2.6 billion + USD 0.2 billion in accrued interest) it will be significantly higher than state expenditures for education, which were equivalent to USD 1.6 billion in the 2018 budget. 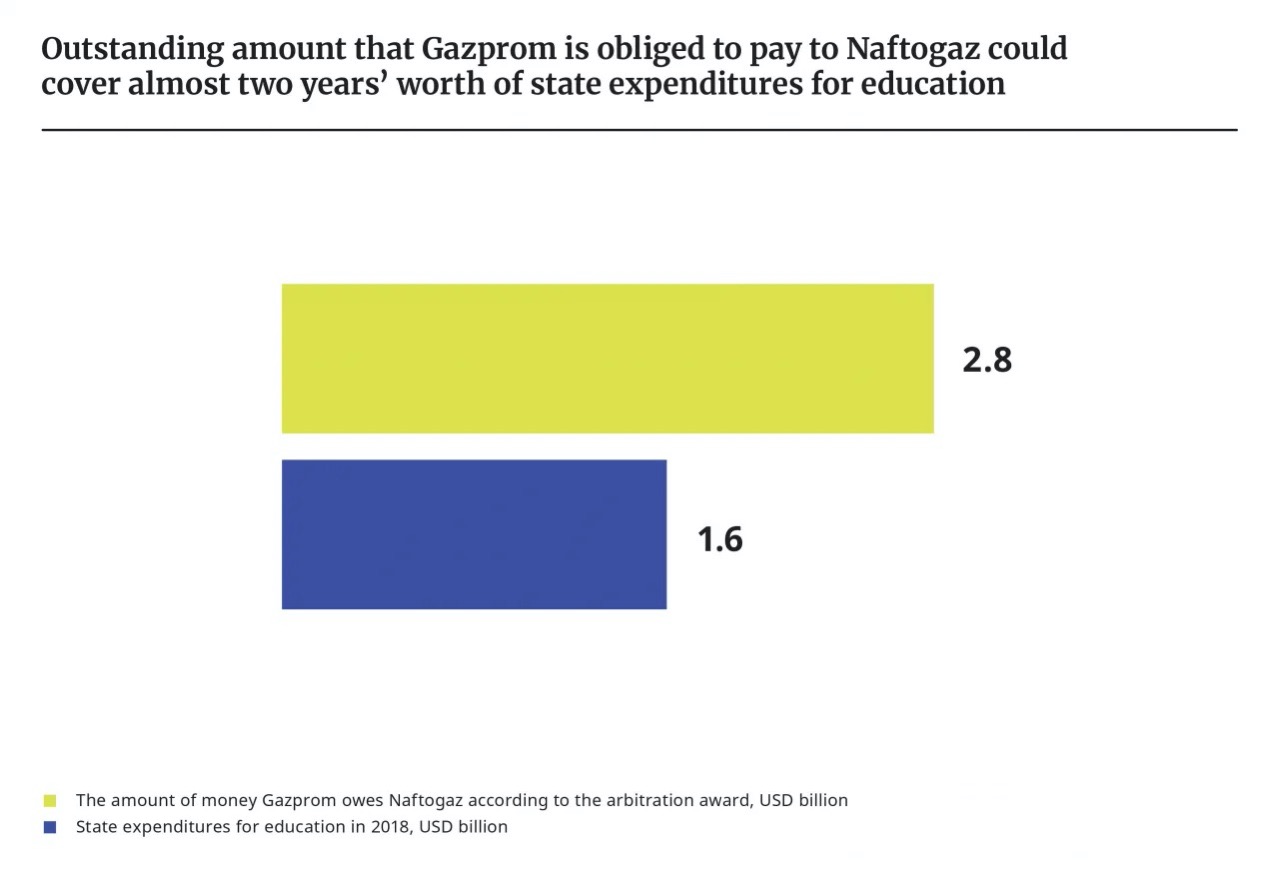 You should also keep in mind that for all the money that it earns, including money the company won, Naftogaz dutifully pays taxes, thus contributing to budget revenues. This, in itself, is enough to understand what kind of effect our Stockholm victory has had on Ukraine’s economy. 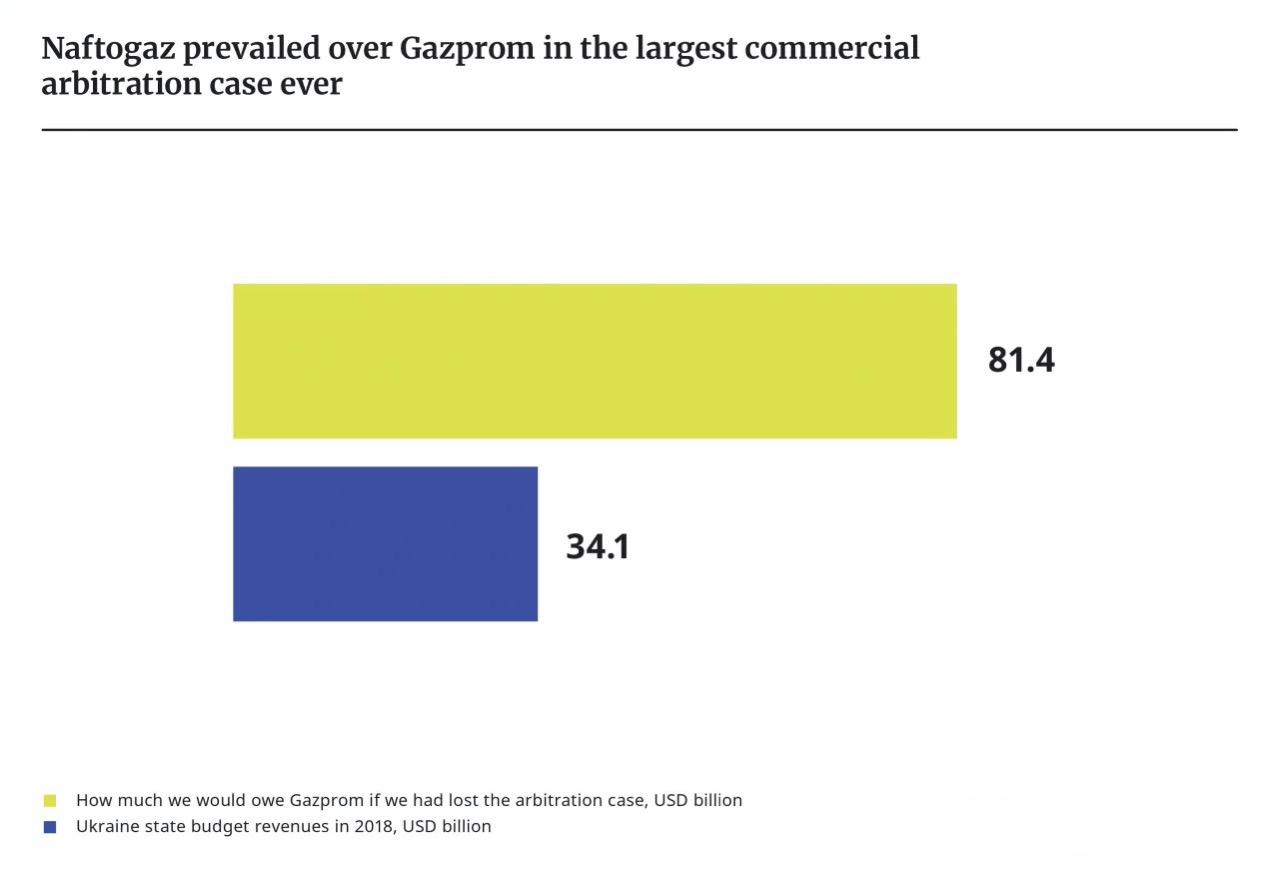