0
Yuriy Vitrenko Library Where Is the Mo...

Where Is the Money Naftogaz Brought In? Spoiler: This Is a Question You Would Want to Pose to the Groysman Government

People might be saying, “We do not see or feel these changes.” They would be right. And this is a real problem for Naftogaz.

Within four years, the company has transformed itself from “the black hole” of the state budget into its largest net contributor. Even compared to the “pre-war” year of 2013, the share of budget revenues coming from Naftogaz has grown sixfold.

It is not the price increase for households, as our opponents state, but the above-mentioned changes in Naftogaz’s commercial operations with respect to gas imports and gas transmission are the most important factor for this transformation.

Let us look at the numbers. Between 2014 and 2018, the price reform in the gas market brought in more than UAH 191.8 billion in Naftogaz’s cash inflows from selling gas to households. This amounts to USD 7.4 billion at the average exchange rate for this period.

If we calculate the cash flows from sales for household consumption under the assumption that the price remains fixed at the 2013 level in USD, and compare it to actual prices in the 2014-2018 period, the increase in cash inflows from the price increase would amount to USD 2.1 billion, accounting for the additional subsoil tax payments.

Compare this to the USD 56.7 billion coming in as a result of changes in Naftogaz’s commercial operations regarding gas imports and and gas transmission, which I have described earlier. As you can see, the financial effect of these changes is greater many times over.

Besides, if you take into account all of Naftogaz’s administrative expenses, including salaries and bonuses, car fleet use and legal services, this amount is even 8.5 times less than the additional revenue from transit that we were able to secure compared to the original terms of the transit contract.

However, this does not prevent government representatives from frequently rechanneling public anger toward Naftogaz while also spreading false claims. This does not help the government much – judging by its approval ratings – but it does hurt Naftogaz substantially. 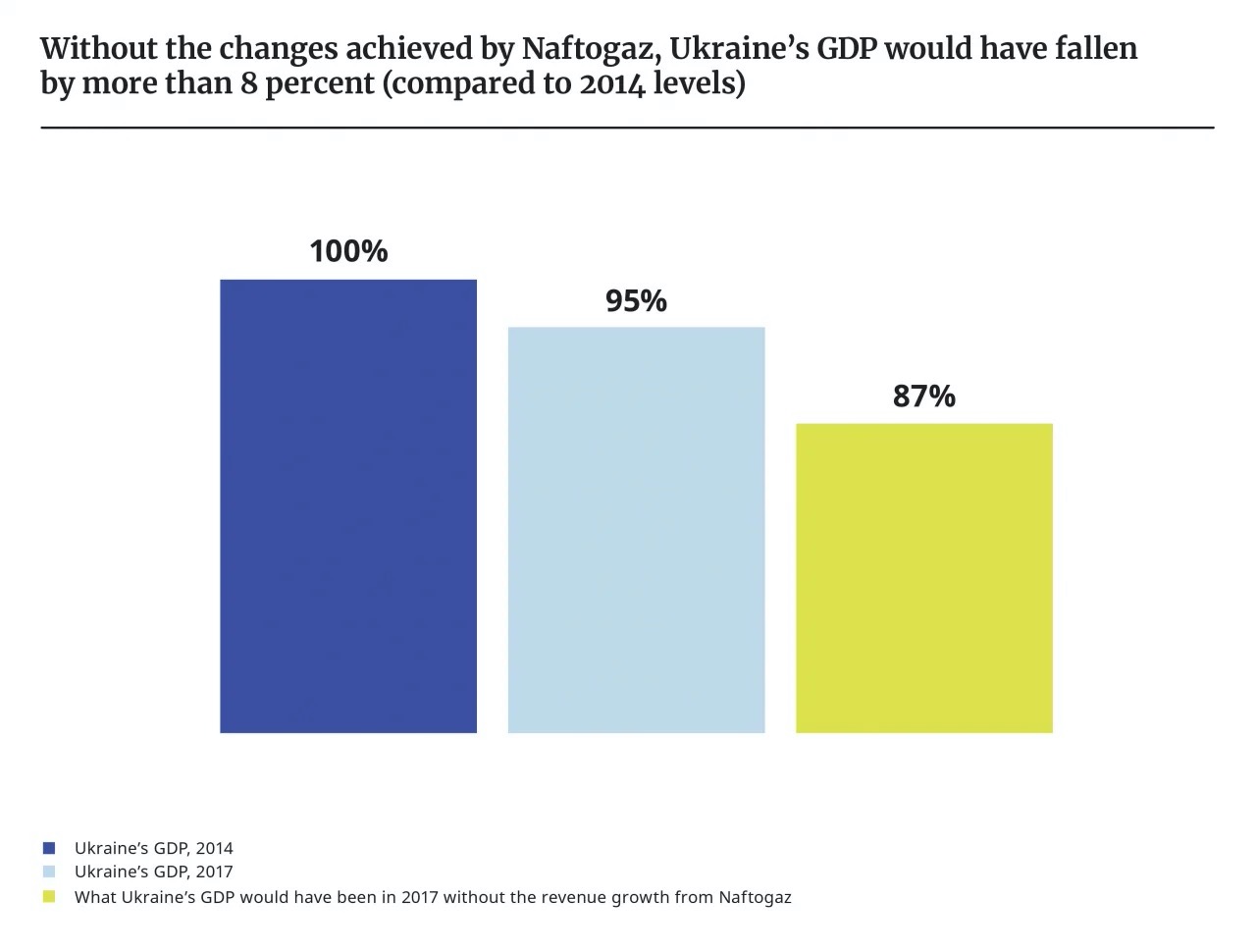 At the same time, there is no denying that, despite the radical improvements in the government’s financial results brought by Naftogaz, the degree to which Ukraine’s economy lags behind the rest of the world is only increasing and too many people do not see how improvements in Naftogaz’s work translate into an improvement of their lives. 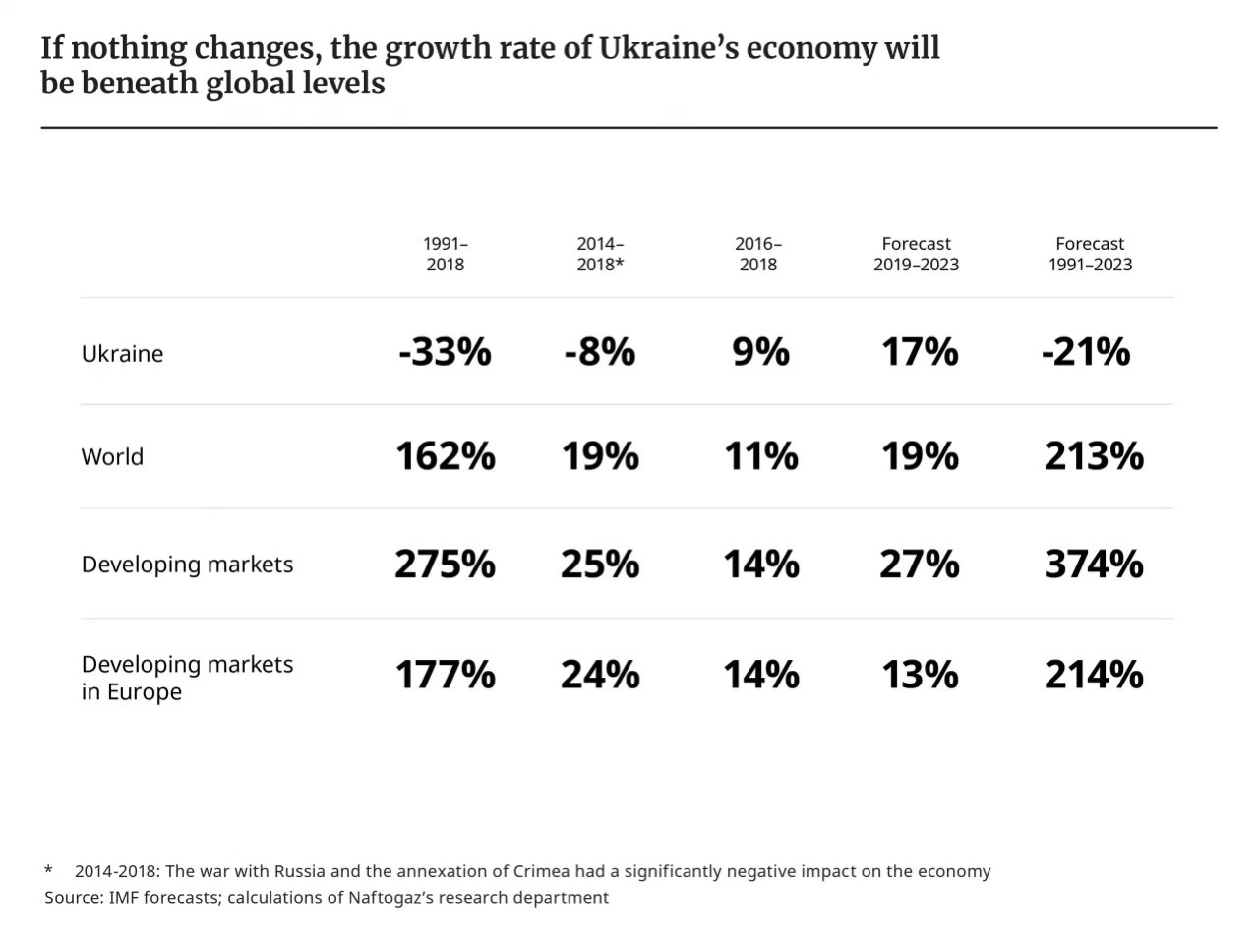 Naturally, we share the view that an almost eighteenfold increase in gas prices in UAH in the years 2014-2018, compared to a wage growth of only 2.7 times for the same period (given that 87 percent of households depend on natural gas), constitutes a serious socio-economic problem.

Our estimates show that if Ukraine’s economy as a whole improved its performance to the same degree as Naftogaz did, Ukraine would already have European-level wages and pension benefits, and consequently such levels of gas prices would not be a problem.

Unfortunately, that is not where we are at yet. However, the increase of pension benefits and salary levels for government employees that has happened in the past few years would not have been possible if Naftogaz had not increased its budget contributions through the overhaul of its commercial operations in gas imports and transit.